It’s undeniable that Peratallada’s history is firmly tied to the medieval times. This is the period when we have the first written confirmation about the village. The Peratallada Castle, around which the village clustered for protection, was the centre of Peratallada’s barony and lineage. This is documented from the XIth century. Each year Peratallada remembers its past with a medieval fair during the first weekend in October, using its squares and streets where one can still capture the essence of those times.

Comedians, jugglers, puppet shows, storytellers and all sorts of personalities from that époque once again fill the village and recreate the medieval market. The little stalls in the Peratallada Medieval Fair offer all sorts of handmade
products: cheese, honey, bread, cakes, herbs, etc. Commercial products are complemented by exhibitions of traditional crafts: clog makers, basket makers, and spinners, amongst others. At the same time, there are a series of entertainments and cultural activities where the public in general is invited to join in. Year after year Peratallada goes back for two days to its medieval past in the days of the Peratallada barons. It all starts off with a speech, followed by a parade through squares and streets, medieval jousts, music, theatre and spectacles in the cobblestone streets

We recommend discovering the Medieval Fair during your stay in the Hotel el Cau del Papibou in Peratallada. 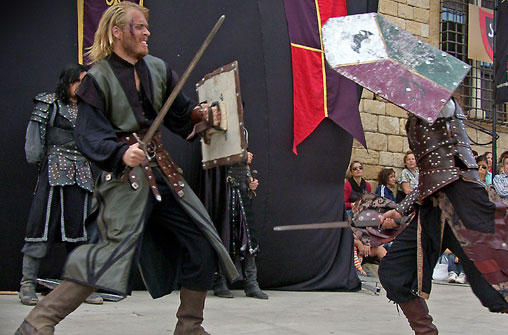